Combat in Eight Seasons revolves around the proper usage of the elements (Winter, Spring, Summer, and Autumn) to defeat opponents. Each element has a different influence on the manner in which an attack is used, depending on its attributes and placement in the attack.

Each element can be placed on to a tree (which itself represents the body). Not only does the element then influence the appearance of the tree (currently this is just an aesthetic change), it also alters the technique of the attack depending on its placement. The individual tree sections represent energy channels; some of these are blocked, but as one progresses through the game, eventually all channels will be unlocked. 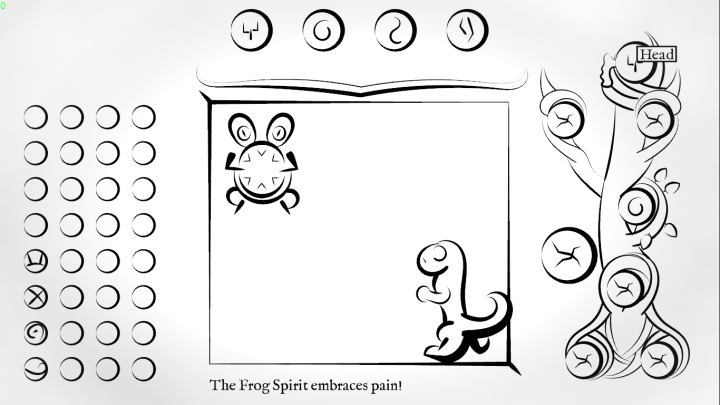 The rest of the elements contribute to the technique. Placing all Winter elements on each energy channel will have an attack that is exclusively for offense. On the other hand, having a Spring element placed at the head of the tree and then mixing in Winter elements elsewhere will create an enchantment that boosts the player's offensive capabilities.

The next point of interest is the left side of the screen. Each icon represents a predefined arrangement of elements. For example, "Blizzard" is composed entirely of the Winter element, and thus is a powerful offensive attack. Not only do scrolls quickly place the elements in the correct channels, they also provide a minor boost to the effectiveness of the player's technique. Blizzard does 12.5% more damage and also boosts the accuracy of the attack by 12.5%. Placing the elements manually without the aid of the scroll will simply not provide this extra boost. 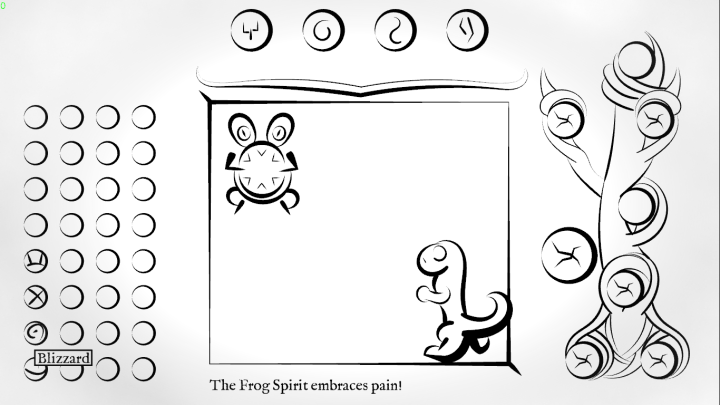 However, it is not always wise to simply use scrolls. Scrolls merely offer a preset technique with a small boost. If the player is facing a speedy opponent, then perhaps mixing in Summer elements with Winter may be the best route; this is because Summer boosts the priority of the technique.

Another point of interest is the small line at the bottom of the screen. This tidbit gives a heads up on what happens during the battle. In both screenshots, the line gives a hint about which technique the Frog Spirit is preparing to use against the player. Thus the player must act accordingly. When battling, it will also inform the player of what is going on (if an offensive technique hit, how an enchantment performed, etc) at opportune times.

Eventually, as the game progresses, there are going to be additional features that the player can make use of during battle, such as additional elements and "momentum." These features will keep battling interesting from the first moment and until the very end.