Algae is a game programming framework based on a the Allegro library and the modern, forward-compatible OpenGL 3. Features include:

The current release of Algae can be downloaded here. This includes the complete source and a rudimentary demo that demonstrates the vector graphics capabilities, as seen here: 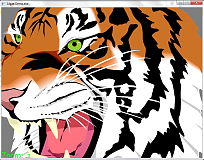 Algae is a successor to a previous C#/Allegro 5 bindings. However, instead of using Allegro 5 for 2D drawing routines, Algae makes use of OpenGL 3.2. This lets Algae support advanced graphics features such as Vertex Buffer Objects, advanced framebuffer formats, GLSL 1.5 shaders, and so on. Allegro 5 is simply used in order to keep Algae cross-platform, as Allegro 5 provides basic input, display (and OpenGL context) creation, system initialization, and audio. This library is expected to be released in the coming weeks.

Egoboo is an awesome little game I had discovered a while back. Now I’m rewriting it and porting it to the Wii! Check out the GitHub project here.